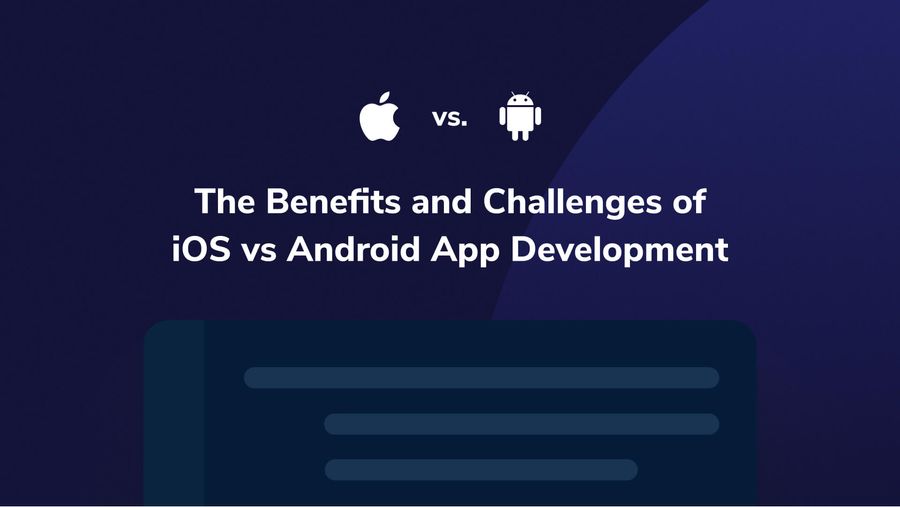 Android and iOS are the two most popular mobile app development platforms worldwide.

Most consumers, regardless of their technical background, understand that these two operating systems are used in mobile technology across their favorite smartphones and tablets.

What’s the Difference between iOS vs Android App Development?

From a consumer standpoint, Google’s Android and Apple’s iOS are often compared based on market share, device performance, popularity, usability, user-friendliness, and longevity.

From the perspective of a mobile app team, particularly a developer, there are a whole range of considerations that go into which platform to program your mobile app for.

The two legendary operating systems have similar architecture and should ideally provide the end user a comparable UX, but there are also significant differences between how each type of app is developed and maintained, as well the audience each is designed for.

Here, we’ll get into the distinctions of creating apps for each platform, which each require a different development approach, present differing maintenance requirements, and more.

Here’s a basic breakdown of the benefits and drawbacks of developing an app for each platform.

As you will invest significant short and long term budget into development, differences between the execution of an Android vs. iOS app will be a top concern for your team.

Because Android apps require more customization and are coded in more difficult languages, they tend to be more expensive to develop and maintain. By contrast, iOS apps require a less significant chunk of your resources to build and execute.

Both Google and Apple additionally charge businesses 15 percent for the first 1 million US dollars of their yearly business earnings for companies selling digital goods or services.

Publishing apps on the Google Play Store is known to be easier than doing so on the Apple App Store. iOS app store approval is notoriously difficult because Apple’s rules and regulations are more stringent than Google’s. Apple’s tooling, signing and capabilities, and review process is often more extensive.

On the flip side, Apple’s high standards for error-free apps increase the chances that your app will ship without bugs. Google Play’s quick approval process is less stringent than the Apple App Store’s, which means you can launch your app quickly and with less hiccups, with the caveat that your app is more likely to be approved with bugs.

Fundamentally, you’ll have to work in different programming languages to build your app for each operating system.

It’s broadly acknowledged that the programming languages used to develop iOS apps natively are easier to learn and master than those used for Android apps, which makes developing an iOS app a more appealing option for beginner coders.

iOS apps are built on Swift, a coding language unique to Apple. In contrast, Android apps tend to be built on more complicated languages as they are created with Java and Kotlin.

A cross-platform development approach is the third option for programmers as they begin developing an app. A cross-platform approach involves using a framework such as Flutter, React Native, or Unity, to build an app for both platforms.

In addition, Google offers a variety of resources for coders of different skill levels, including layouts ideal for beginners and more complex designs for experts.

Apple instead provides an API, SwiftUI Design tools, and Storyboards in Xcode to help developers design their App's UI. Because coding for iOS is less convoluted, it could be argued that Apple doesn’t need as extensive resources as Google.

By contrast, Android’s open sourced model gives developers access to source code for the mobile OS, meaning programmers can modify and alter significant areas of the code based on their discretion. Open models like Android’s give developers more customization options to make deeper changes to the software, influencing core features of the app, based on what they hope to achieve in the development process.

When coding for iOS devices, developers have less “fragmentation,”  or variation between devices, to deal with, which streamlines the coding process. The uniform experience of core features across iOS devices, including the experience of options and colors, is intended to create a cohesive user experience.

In contrast, Android applications must be meticulously built and tested, because there are so many different types of devices developers must build for—with varying speeds, screen sizes, screen resolutions, etc.— to adapt to. Manufacturers' ability to modify Android’s source code can also cause issues with a device’s handling of processes such as notifications and other background tasks.

Because so many different Android devices exist, ensuring that your app is tested and optimized for all these possible resolutions and sizes can also be time-consuming, which increases time to ship. For all the above reasons, responsive design and UI development and changes are harder to execute for Android apps. This is also part of why increased development costs are associated with developing an Android app versus an iOS app.

Freedom for Flexibility and Creativity

Developers have more liberty for creativity in coding for Android apps because of the OS’s open system infrastructure. With this open environment, developers can make more decisions around the look and feel of an app, including its core features. This does carry the caveat that there are then more ways for your code to break. With iOS, apps have a cohesive look and feel, but Apple gives a limited scope of what developers can customize within their interfaces.

In understanding which operating system to code for, you should first understand the distribution and demographics of your target audience.

When it comes to global dominance, Android pulls ahead of Apple. Whereas Android claims 71.6 percent of the global market share, iOS claims only 27.73 percent. What this means is that there are vastly more users who own Android devices across the globe. Android devices are cheaper and more accessible to users globally. This is especially true for emerging markets such as Latin America, Africa, and Asia. By contrast, iOS app users are heavily clustered in Europe, North America, and Japan. Regarding gender split, men are more likely to use Android devices and women are more likely to use Apple devices.

Another key difference between iOS and Android experiences is how you can expect to engage your customers. How you communicate with your users will affect your app experience and growth potential over time. One core difference between the engagement experience each platform provides is the framework required for users to give permission to receive push notifications.
Before, only iOS users were required to opt into push notifications, while Android users were automatically subscribed to this messaging channel. As of Android 13, however, Android users are also required to provide explicit permission in order to receive these alerts. Before, there was a significant difference between how marketers could approach their users given the significant differences in permissioning. Now, both operating systems will require this explicit opt in, meaning both must be extra tactful in prompting users to subscribe to notifications.

Another important announcement that came out this year that affects how companies can message their users was iOS’s recent announcement of Live Activities, which are interactive push notifications. These types of push were designed by Apple to enable iOS apps to provide real-time updates to their users that are visible from the lock screen. This change has a significant impact on the way iOS apps deliver their customer experience.. With Live Activities, iOS users receive interactive updates without the redundancy or annoyance of a stream of notifications.

Because OS changes are always occurring, you’ll need to stay on top of these trends yourself to effectively messages your users, or you can adopt a marketing automation solution that handles these development frameworks on your behalf.

A few years ago, cross-platform development tools were used as a shortcut that would speed up the development process, but were known to compromise the quality or speed of an app. Since then, it’s become more feasible to build quality apps using cross-platform tools such as Flutter, React Native, Cordova, or Xamarin.

However, larger companies often still choose to build native applications both because they have more robust teams teams at their disposal and because a native approach can result in slightly better experiences. Occasionally, smaller companies choose this path if they have experience building native apps or they prefer the process.

A key challenge presented by a cross-platform approach, however, is ensuring that behavior is consistent across both iOS and Android. There may be minor differences in how each operating system handles a behavior, process data, or other variations that affect the user experience. Cross-platform developers must thoroughly test on both platforms to ensure uniformity across operating systems.

“In the end, most developers will want to eventually build for both platforms, because otherwise, they will miss out on a lot of the market.”

Get Started with OneSignal

OneSignal is designed to help you send notifications and seamlessly manage your user communication across various channels, including mobile push notifications, web push notifications, bulk SMS, in-app messaging, and email. Our platform is quick to set up and makes it easy to send eye-catching messages without doing any development work. If you don't have a OneSignal account, you can create one for free and start sending push notifications to your users today. Don't take our word for it — simply sign up and see for yourself!

Get Started for Free

Learn how to use the OneSignal Postman collection to build a custom OneSignal Dashboard.