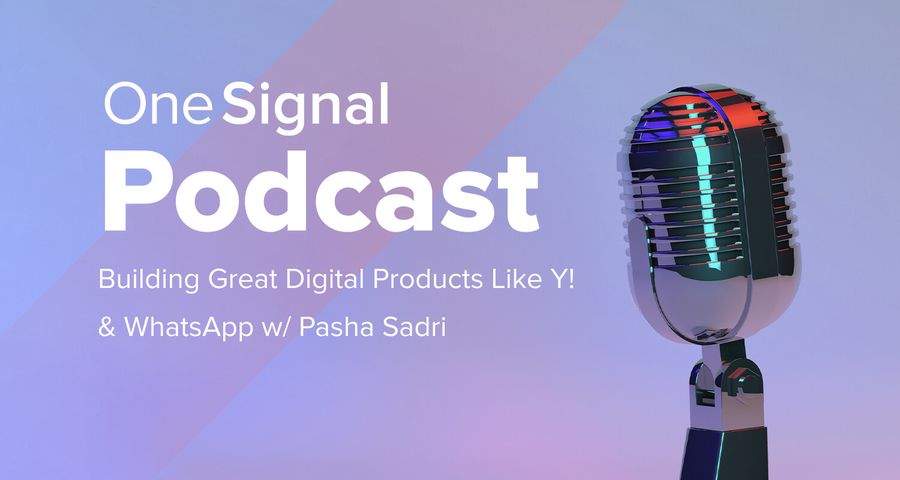 “No matter where you are or what you're doing, always do a great job, it will pop up, decades into the future" - Pasha Sadri on how he ended up at WhatsApp.

The OneSignal podcast aims to democratize digital messaging best practices, industry news, and product expertise. Today we're joined by Pasha Sadri, who has been behind some of the biggest digital innovations over the past 20 years; Maps, Y! Pipes, Polyvore and WhatsApp.

Pasha discusses his journey, the technical decisions required to scale, what makes magic in small teams and much more. The podcast is hosted by OneSignal's Josh Wetzel.

Intro (0:40) - Pasha discusses his background, how he started at Y! in 2000.  How he felt privileged to build and launch great products.

(3:35) Google Maps launch blew everybody's mind. He joined Google Maps team for a year, then returned to Y! to be a leader on the innovation team.  This spawned Pipes.  During Pipes building, Pasha gained an interest in building a visual business software tool for companies to pull images together.  This was realized as a consumer product called Polyvore which found success with women collaging, specifically around clothing and art.  After a few months of success his two co-founders, Guangwei Yuan and Jianing Hu, left their roles at Y! to focus on building Polyvore.  Pasha followed a few months later.

(8:30) There was a couple of month period when Pasha was working ten-hour days on pipes, then come home to eat dinner and worked several more hours every evening on Polyvore.

(12:35) Leaving Polyvore, Pasha had spent 8 years in total working on the product and business.  How did he end up at WhatsApp?  He considered another startup, venture, then starting to discuss opportunities.  WhatsApp cofounders Brian Acton had previously worked with Pasha at Y!.  He heard Pasha was a free agent and recruited him.  WhatsApp was supporting 400 million unique monthly users.

(14:55) Pasha stresses how it is important to do a great job at all times.  You are making an impression on your colleagues, contributing to everybody’s success.  “I recommend people should always do a great job, it will come back to you decades later in unique and important ways” Pasha.

(18:40) What is your take on scaling culture to maintain growth and consistency?  It’s important to build a culture of experimentation.  As humans, we need positive feedback for our actions.  By doing a lot of experiments, there is a chance many of them won’t work.  At Polyvore, we realized we needed to frame every experiment, even failures, as a success. Even in failure, we viewed them as positive because we learned something.

When you have a culture of experimentation, you get a tighter cycle of feedback to gain insight and keep the team engaged.

(21:00) How do you say no, to prioritize the most important projects?  WhatsApp was the place Pasha saw this best demonstrated.  He relays a story about his interview with Jan Koum (co-founder & CEO) where he brought ideas to the conversation and Jan was firm in saying “No”, which was an example of a laser focus on their core values and goals - “Fast, Simple and Secure”.  Having a framework in place and sticking to it was important.

Please subscribe to the OneSignal Podcast at your preferred podcast directory, Spotify, Apple, Google, TuneIn, among many others.