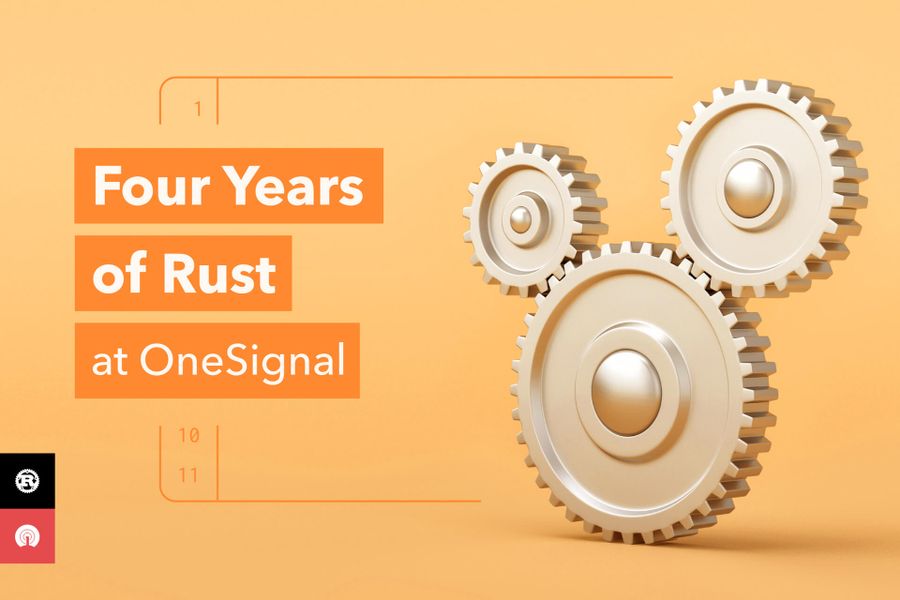 OneSignal has been using Rust extensively in production since 2016, and a lot has changed in the last four years – both in the wider Rust ecosystem and at OneSignal.

At OneSignal, we use Rust to write several business-critical applications. Our main delivery pipeline is a Rust application called OnePush. We also have several Rust-based Kafka consumers that are used for asynchronous processing of analytics data from our on-device/in-browser SDKs.

Since the last blog post about OnePush, the volume of notifications delivered has increased dramatically. When we published that blog post back in 2016, we were delivering 2 billion notifications per week, and hit a record of 125,000 deliveries per second.

Just this month, we crossed the threshold of sending 7 Billion notifications per day, and hit a record of 1.75 million deliveries per second.

That's 24x the overall rate, and 14x the maximum burst rate! We credit this huge expansion to the performance gains won from our use of Rust.

To mark these throughput records, we're looking back at how Rust has transformed the way we deliver notifications here at OneSignal.

OnePush has been in production at OneSignal since January 2016. Back then, the latest stable release was Rust 1.5 (we’re now on 1.44!).

Rust has seen a lot of changes, libraries, and new features since then. Here are some of the highlights:

Our previous OnePush blog post also highlighted some pros and cons of choosing Rust. Although some of these have changed, others have stayed the same. Here's how the pros and cons compare now:

Rust has grown a lot from 2016 to now, but one of the most exciting ways that Rust has become more useful is in its adoption of asynchronous programming.

We initially used threadpools and channels for processing items asynchronously, but over time we heavily adopted the futures-0.1 ecosystem internally in all of our Rust applications. We wrote manual state machines that implemented Future, and we used huge chains of .and_thens and other combinators to write more procedural-like chains of future execution. This was manageable, but there were several issues with it:

This pattern for performing postgres queries was all around our codebases:

This has several concrete issues:

In November 2019, the async/await feature was stabilized along with the release of Rust 1.39, allowing futures to easily be written in a very similar manner to synchronous code. It had several key advantages over the combinator system:

The get_fields function, shown above written with combinators, was easily rewritten with async/await:

This version demonstrates all of the benefits of async/await over combinators:

This held the opportunity to remove large amounts of future-juggling code that we had in our Rust projects, and it was a very exciting prospect. We were hugely excited about async/await when it was first released, landing a PR to rewrite a portion of our tests using it over combinators the day after 1.39 was announced.

We were immediately taken by how much simpler it was to write futures using this new syntax compared with the old combinators. There were still a few signs of the newness of async/await:

Over the last four years, there have been a lot of new features and improvements added to Rust. We think that the opportunity for improvement is still there, and there are some very exciting RFCs on the horizon:

Both of these have been open for a while and still have lots of work before they can be merged, but they both represent huge steps forward for the language. With proc_macro_hygine landing in 1.45 next month, some of the biggest features holding people to nightly Rust are making their way to stable. This is a great sign of Rust maturing, and Rust is going to continue to be a central part of OneSignal's strategy going forward.

Interested in joining the OneSignal team? Learn more about our open positions by clicking the button below.

OneSignal
—
Four Years of Rust At OneSignal
Share this